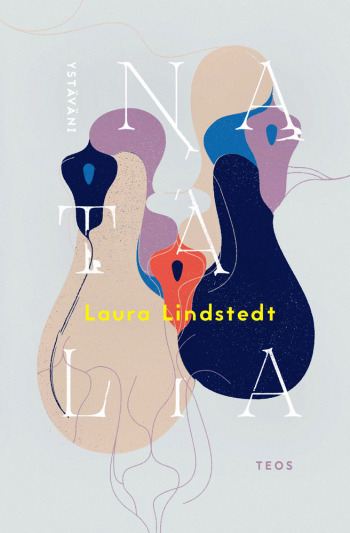 French rights to Laura Lindstedt’s new vibrant and literary daring novel, My Friend Natalia have been sold to Gallimard. We are thrilled and congratulate Laura Lindstedt’s publishers around the world: My Friend Natalia will be published in 11 territories and counting! Recently, North American rights were acquired by W.W. Norton/Liveright and 9 European deals closed over the summer, making this property one of the hottest Finnish novels ever.

“Laura Lindstedt (born 1976) won the Finlandia Prize in 2015. The 45-minute therapy sessions in her third novel uncover new worlds and perspectives. But these sessions go far beyond professional ethics and a normal duty of care…My Friend Natalia is a surprisingly easy read and a liberating, almost boisterous, book.”

My Friend Natalia  (Teos 2019, 240 pp.) is a thrilling exploration of gender, sexuality, and power following an ambitious therapist and a patient with a unique psychological obsession who become entangled in a complicated, explosive relationship.

The narrator of My Friend Natalia is a therapist whose gender is deliberately left undisclosed. The story begins when Natalia arrives at her therapist’s surgery. Natalia is having problems in her sexual life. Her thoughts obsessively swirl around the subject of sex, but during the act itself, her mind drifts elsewhere. Natalia has had a vast number of sexual partners, but these relationships never last long. Why are fantasy and reality so far removed in Natalia’s life? Is Natalia’s hypersexuality a symptom of a deeper problem? Running through the novel is the question of power. Who is ultimately guiding the course of these sessions – the therapist or Natalia? And which of them is the true narrator of the novel?

Laura Lindstedt is a Finlandia-winner and one of the most celebrated young Finnish authors of recent years: her novels verge on the postmodern and experiment with form and language in an accessible style. The Finlandia winning novel Oneiron has been sold in 14 territories, and over 50,000 copies sold in Finland. Her works have been translated into 18 languages so far. Laura Lindstedt is currently revising her PhD on French author Nathalie Sarraute and touring the world to promote her works.

MY FRIEND NATALIA published in the US as a paperback!

Excellent start for ONEIRON in Poland! Interview with Laura Lindstedt

An Evening with Laura Lindstedt, the “Rock Star” of Finnish Literature

MY FRIEND NATALIA by Laura Lindstedt published in the US today

French rights for My Friend Natalia acquired by Gallimard

Breaking news! US deal for Laura Lindstedt’s MY FRIEND NATALIA!

My Friend Natalia sold to Italy

My Friend Natalia sold to 3 new countries in one week