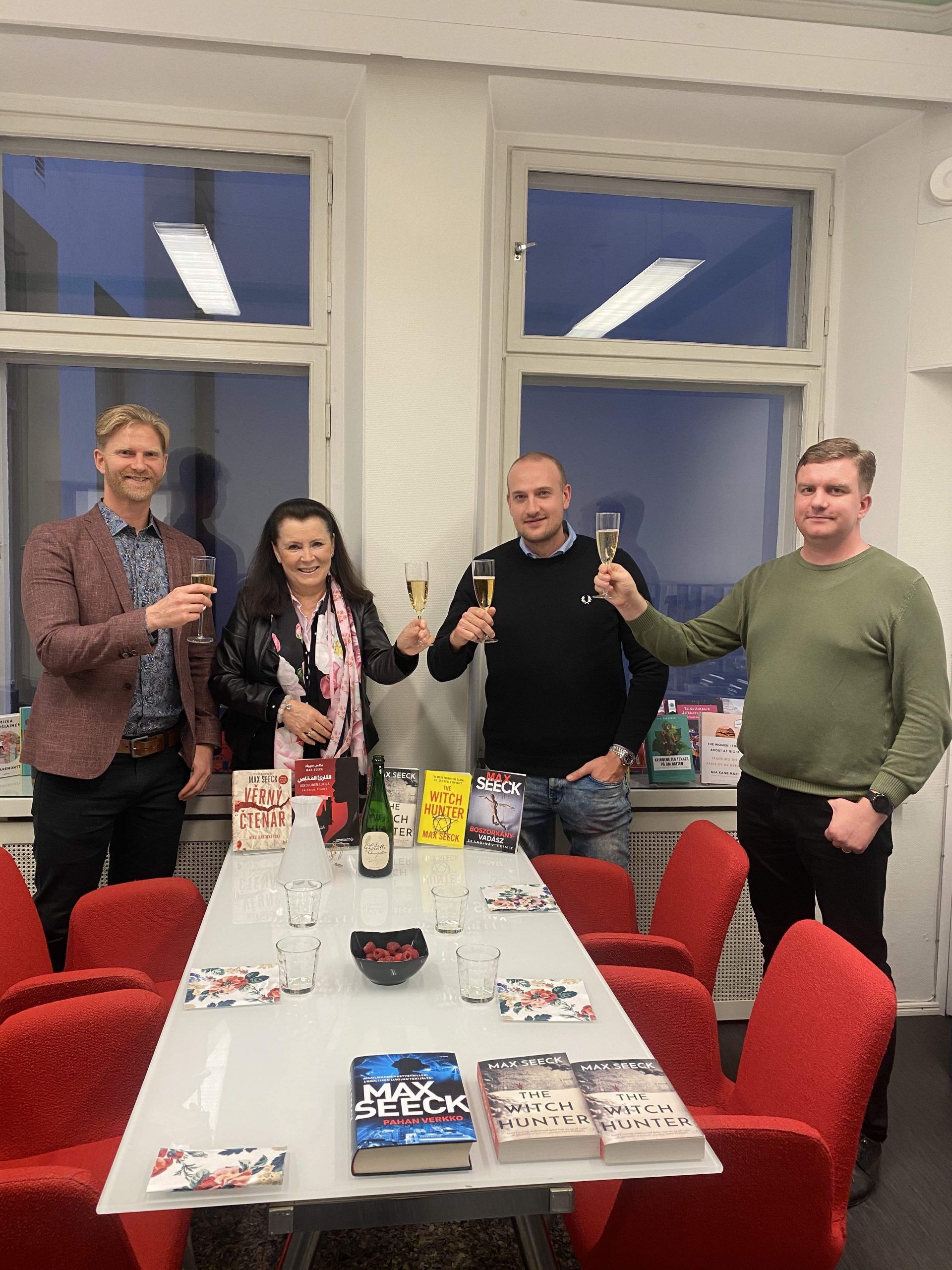 CONGRATULATIONS to Max Seeck for writing his way onto the NY Times Bestseller list, and into Finnish literary history, with THE WITCH HUNTER!

Debuting today at #11 on the NY Times Bestseller list for trade paperback fiction, “The Witch Hunter,” by Max Seeck, is on a meteoric rise up multiple bestseller charts. At Barnes & Noble, where “The Witch Hunter” is a featured novel, it has soared to # 5 for paperback fiction and # 51 overall. He is one of only two Finnish authors ever to crack the NY Times bestseller list; Mika Waltari is the other, who topped the list in 1949 with The Egyptian.

We hope you’ll join us in offering a tremendous CONGRATULATIONS to Max for this historic moment! As you can see, his accomplishment certainly demands a champagne toast… with many more to come! A Hollywood TV series based on The Witch Hunter is in development by Greg Silverman’s Stampede Ventures; stay tuned for updates!

The Witch Hunter, AKA Faithful Reader (Jessica Niemi #1) was translated from Finnish to English by Kristian London and published in the US on October 27. It was immediately selected by Barnes & Noble as a Monthly Crime pick, shooting up the B&L charts 40 places just yesterday alone to number 51! The next installment in the Jessica Niemi series, “Evil’s Net,” was recently published in Finland, and rights to the title have been sold to 22 countries. Read below if you can still obtain it.

The Wall Street Journal gave Max Seeck’s US debut high praise:
“The Witch Hunter, translated with icy precision by Kristian London, is written in short, sharp, present-tense chapters, a technique which adds to its relentless tension. Flashbacks to earlier episodes in Jessica’s life suggest that the strangeness currently unfolding is tied to her personal history. Discovering the how and why of it brings a resolution as bleak as anything Poe might have conjured.”  – The Wall Street Journal full review here.

Six months have passed since Jessica’s encounter with the mysterious and serial-killing coven of cult members, and her team has a new assignment. Two Instagram influencers have gone missing, and a dead woman is found on the beach dressed up in manga outfit – an outfit that was featured on the missing blogger’s Instagram.

Ask for the English manuscript by clicking here

Faithful Reader – Jessica Niemi series #1 (2019, Tammi)
Detective Jessica Niemi is called to investigate a murder case that is out of ordinary. The wife of a famous writer, Roger Koponen, seems to have been killed in a bizarre ritual. As more ritual murders occur, it becomes obvious that Jessica is after a serial killer.

Ask for the full English manuscript by clicking here

Evil’s Net – Jessica Niemi series #2 (September 2020, Tammi)
Six months have passed since Jessica’s encounter with the mysterious and serial-killing coven of cult members, and her team has a new assignment. Two Instagram influencers have gone missing, and a dead woman is found on the beach dressed up in manga outfit – an outfit that was featured on the missing blogger’s Instagram.

Ask for the full English manuscript pages by clicking here

The Angels of Hammurabi – Daniel Kuisma series #1 (2016 Tammi)
An employee of the Finnish Embassy in Zagreb goes missing, and Daniel Kuisma from the Finnish Defence Forces is sent to investigate, along with Annika Lehto from the Ministry for Foreign Affairs.
The investigation gets unexpectedly complicated when the mysteries of the past start to unravel on the stony shores of the Adriatic Sea. It all seems to boil down to a group called The Angels of Hammurabi. Who are they – and who is killing them off, one by one?

Mephisto’s Touch – Daniel Kuisma series #2 (2017, Tammi)
Missing-presumed-dead Finnish diplomat, Jare Westerlund has fled from Croatia on a forged passport, leaving behind a decapitated body and his trail goes cold at Stockholm airport.
When Interpol officer Annika Lehto hears of his escape, she abandons her sick leave to go off in pursuit, with the aid of special forces specialist Daniel Kuisma. What follows is a dramatic chain of events, from northern Norway, to San Francisco, to The Hague, as the pair continue the chase.

Call of Hades – Daniel Kuisma series #3 (2018, Tammi)
Final installment of the  trilogy begins with four executed men found in a Zagreb apartment. The place is owned by the U.K. government, but no one seems to know anything about the case. When Daniel Kuisma receives an unexpected guest from Southern Europe he hears something that makes him board the next plane to Zagreb: the lives of thousands of people might be at risk. Meanwhile Annika Lehto is recovering from an assault, but offers him all the help she can from her sickbed.