Jorma Ollila became the pre-eminent European businessman of his generation during his time as CEO of Nokia Corporation from 1992 to 2006. Ollila currently works as Chairman of the Board of Directors at Royal Dutch Shell and at Outokumpu. He has master’s degrees in economics from the London School of Economics, in engineering from the Helsinki University of Technology and in political science from the University of Helsinki.

Against All Odds: My Emotional Journey with Nokia (Mahdoton menestys: Kasvun paikkana Nokia, Otava 2013), Ollila’s autobiography of the company that created a global mobile revolution, was 2013’s bestselling narrative nonfiction book in Finland, and was selected as one of the year’s most fascinating books by the influential Suomen kuvalehti magazine.

Harri Saukkomaa, co-author of Against all Odds, is a well-known media expert, entrepreneur and author of several nonfiction books. 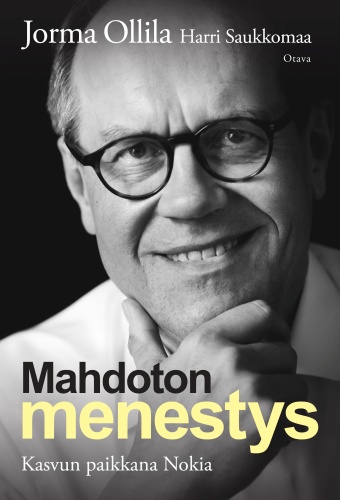 Against All Odds: Leading Nokia from Near Catastrophe to Global Success