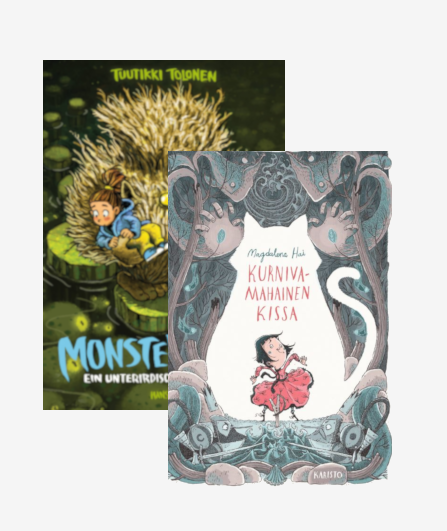 The series has now already 30 publishers around the world and a feature film in development by Scott Free Productions.
The rights are still available in the UK, Japan, Bulgaria, Greece, Serbia, Slovakia, Iceland, Croatia, Israel etc.

The three books are all illustrated by Pasi Pitkänen.

Praise for MONSTER NANNY:
I was fascinated by the characters who were taking matters into their own hands and getting over their difficulties. The setting of Nanny Monster is enough to interest children, and the unique setting inspires courage and wisdom in children. I am sure it is a must-read book for parents who make their children enterprising as well as for their children. – Jang, Sunhee, President of Seosawon, South Korea.

GRUMBLEBELLY CAT by Magdalena Hai and Teemu Juhani has now another rights sale! Swedish rights were acquired by Epix Bokförlag!

Previously, the wonderful allegory has been acquired by Dressler/Oetinger Verlag in Germany, Antolog in  North Macedonia, Tiritamm in Estonia, and Vild Maskine in Denmark.

Praise for GRUMBLEBELLY CAT:
A wise and fearless fairytale novel about a cat with an appetite bigger than itself. At the same time it is a story about a girl smaller in size than her soul.
– Aamulehti newspaper

In a barren land, when a little girl meets a gigantic cat that threatens to devour her, she makes it a smart offer. The girl leads the cat across the lands, looking for something to satiate its hunger before it eats her, but they encounter draught, destruction and people who have nothing to eat except their dreams. When the cat gobbles up the girl, she finds something in its belly, something that has made it so hungry…