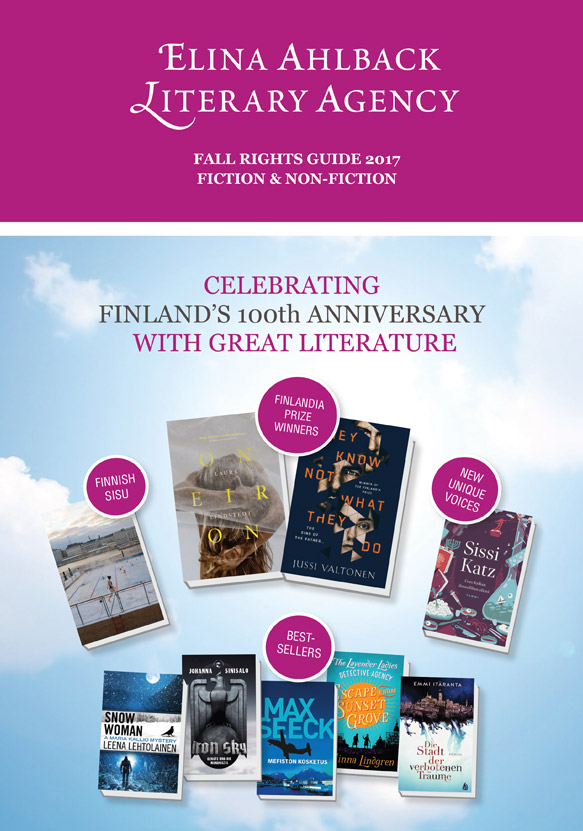 As summer draws to a close, we’re excited to kick off the fall season with our brand new rights guide. Click here to download our new fall 2017 catalogue containing – amongst others – some exciting new voices in literary and crime fiction from Finland.

Having signed with two new authors, we are proud to present Sissi Katz and her assured, literary debut novel, The Amazing Life and Times of Coco Kafka, followed by a gripping thriller about a Finnish chef who enters a cooking contest in Tokyo, where danger lurks, in Heikki Valkama’s culinary suspense, Fugu.

In non-fiction, Katja Pantzar delivers the full manuscript for her memoir-lifestyle guide, Finding Sisu: In Search of Courage, Strength and Happiness the Finnish Way – sold in 11 territories on proposal.

2017 is a year for particular celebration as Finland prepares to mark 100 years of independence this December, which we are proud to celebrate with the best of Finnish literature!

Stay tuned for more exciting news on our authors and their books in the coming weeks . . .

The Mephisto Touch by Max Seeck

“Skilfully plotted with a surprise at the end.”
– Eeva magazine, Finland

“Lindstedt weaves her unlikely story with the finest of writer’s hands – Oneiron is a spectacular novel.” – Svenska Dagbladet newspaper, Sweden

“A prize-worthy, magnificent meditation on the afterlife . . . with a suggestive warmth and forgiveness towards death in this frank portrait of seven women told with humour and a strong desire for storytelling.”
– Dagens Nyheter newspaper, Sweden

Memory of Water by Emmi Itäranta

“Sad but told with a beauty that Emmi Itäranta communicates through language and Noria’s thoughtful story, where all flowing feelings are tamed in the peace of the ceremony. Afterwards, you are strangely cleansed, as if reading the book itself was a ceremony.” – Dagens Nyheter newspaper, Sweden