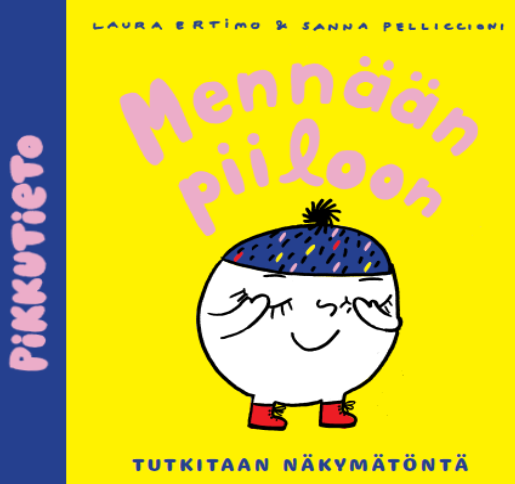 In the second title of Mini Science series – INVISIBLE WORLD – the adorable Plop will discover the things one cannot see: electricity, garden in the fog, darkness, micro-organisms and other invisible things.

When Plop will get sick, he will learn about bacteria and viruses and how to avoid them. Vaccinations can seem scary, but they keep us healthy!
Sometimes it’s better to stay home, even if this makes you bored, so that soon you could go discovering the Dark Side of The Moon! 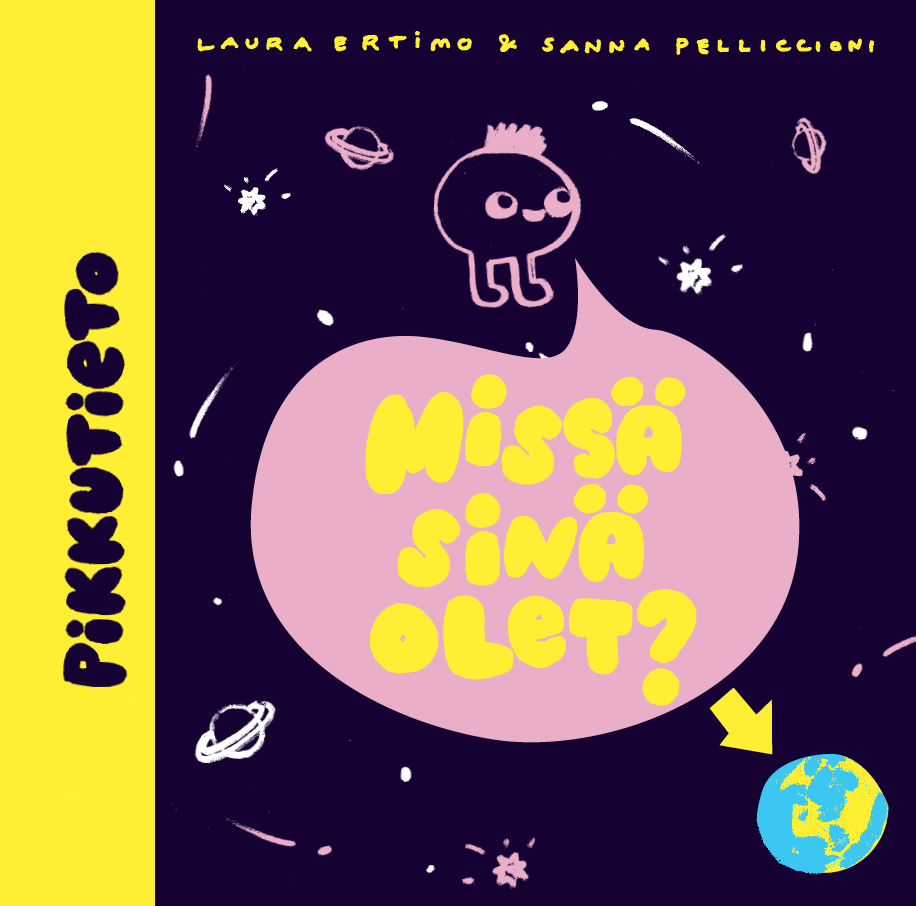 New science series for the smallest in the family!

Mini Science is a new nonfiction series for the smallest in the family. The series will tackle big science questions with lovely illustrations, and encourages kids to wonder and ask questions. It feeds curiosity and is designed to start conversations about different topics that children might not think about on their own.

In Where Are You? we follow Plop, a little creature who guides us through space to the Earth and from there to the human DNA and finally to the world of atoms. Zooming in all the way from the enormities of space to the minisculness of atoms, we learn a great deal in between.

Onni is a curious toddler who examines the world around him by banging on a kettle drum, smelling flowers and flipping through books. In this book we get to follow Onni’s busy and colourful day, with its joys and moments of disappointment, from morning to evening. Mom, dad and friends also take part in the fun. The perfect first book.

Onni travels abroad with his mom and dad to see cousin Elviira, uncle Pablo and aunt Tuulikki. First the suitcases are packed and the family heads to the airport, where Onni stares at the airplanes in wonder. Soon Onni also gets to travel by train and see the ocean and seagulls. Once he finally sees his cousin gets to play in the sand, splashes in the ocean and spots bats and moths at night. Back at home he dreams of an airplane, a hot air balloon and a ship. And what does he find in his suitcase?

When he eats breakfast with his parents, Onni knows how all the leftover food is split into different waste containers. Later, while taking the garbage out with his dad, he sees his neighbour taking out old cardboard boxes. Onni’s dad has an idea to build a ship out of cardboard, and the whole family has fun getting creative. Later the neighbours gather at a yard sale where every fun item has its own story.

Onni’s mom and dad have big news: there’s a baby growing in his mom’s belly, and Onni is going to be a big brother! Onni gets to go to the doctor with his mom and listen to the baby’s heartbeat. A sound of “tum, tum, tum, tum” echoes through the room. When the big day arrives, grandma and grandpa come to watch Onni while mom and dad go to the hospital. Soon Onni has a tiny little brother. At home he wonders why the baby just eats and cries and doesn’t know how to play at all. He gets to help in taking care of the baby, too, and go swimming with his mom while dad watches the baby. Who will be the first to make the baby smile?

It’s time for Onni to begin preschool. The school is called Ladybug, which Onni thinks is a good name, and it has plenty of fun things: pillows for fort building, a corner for telling stories and a huge craft room. One day, though, Onni decides that he no longer wants to go to preschool. “But Viljo from next door is there, and a big toy train set and a slide outside. And mom and dad will come get you at the end of the day. And you will make new friends,” his parents encourage him. When the day is over, Onni has changed his mind: “You came too early; my ship has to sail all the way to Africa,” he says when he sees his mom at the door. Her shoes are damp from the rain, but she is beaming with happiness.

“Today we are going on a nighttime adventure,” says Onni’s dad and tells him that they might see or hear owls, hedgehogs, bats or moths. “Do you think we might see ghosts or monsters?” asks Onni, who would much like to spot at least one monster. The next day Onni, little brother Olavi and Viljo from next door pretend to be ghosts.  Onni turns off the lights, and little Viljo starts to cry: he says there is a monster under the bed. Is this game too scary? Sometimes being afraid can be fun, and other times it doesn’t feel so fun at all.

Aram from Iran moves next door. He and his brother Olavi decide to bake FInnsih sweet buns, pulla, and take them to their new neighbours. The next day Aram brings over rice pudding. The boys realize that although they do not share a common language, they can still play together. Both boys are occasionally confused by the other’s family customs, but when one particular holiday approaches, they notice that both families are preparing similar foods and decorations. Aram’s sister, too, makes a new neighbour friend, his mother finds a Finnish language teacher, and an enthusastic recipe swap begins in the neighbourhood.

BOOK VIII: Onni Wants It All

It’s Onni’s birthday, and the celebration is even more fun than he expected. The next morning he wants juice and lollipops for breakfast. “Why can’t every day be birthday?” he asks. Onni’s dad trips on a toy car. ”Where did all this stuff come from?” he wonder. There are too many toys already, but Onni would really like to have something new and exciting: it seems like there is never enough. Onni and dad fix a broken toy together, and mom and little brother Olavi go next door to bring some baby toys to little Viivi. But what does Onni say when mom wants a new pair of shoes?

Onni visits his grandma and grandpa all on his own for the first time. Although nervous at first, he gets to build a fortress out of sheets, go on a bike ride with his grandma, sit by the bonfire and sneak candy out of the cabinet. Finally he sprawls out so comfortably on his grandparents’ bed that his grandpa ends up on the floor. The next day he has plenty of fun stories to tell his family.

Onni has a terrible flu! But even that has its positive sides: he gets hot chocolate, cough drops and – what’s best – he gets to play with the computer! His brother thinks its unfair that he gets to play so much, and dad gets a headache for playing too much. At times they play outside, too, and play chess. But the brothers are quarreling and would want to sit at the computer all the time. Mom would want to throw the whole machine down from the balcony. Then dad thinks he’s come up with a solution for the gaming! Will it work?

Onni’s summer holiday is coming to an end. Soon he’ll have to start preschool.
“Is preschool easy?”, Onni asks his next-door neighbour Eino.
“It’s easy as long as you know how to handle it,” replies Eino mysteriously.
That evening, Onni feels more nervous than he’s ever felt in his life. Luckily dad’s got a good medicine to cure preschool nerves.

The twelfth book in the much-loved Onni series is all about the unique relationship between children and animals and what children can learn from their furry friends. Onni and Olavi finally get what they’ve been waiting for: their very own hamster! At first their new pet is really shy. Then the whole family learns how to take care of the animal and make him feel at home. But when the impatient Olavi wakes the hamster in the middle of his sleep, he getfrightened and bites Olavi’s finger!

The thirteenth book in this much-loved series is about the joy of winter. Onni’s family catch the train to the north of Finland because Onni’s mumhas caught Lapland fever! They arrive at a cabin in the middle of the snow. When a girl whizzes past on her skis, Onni issuddenly very interested in skiing and his neighbour’s reindeer… well, yes OK, also a girl called Netta. Onni has made a friend in Lapland.

Onni’s mum can’t wait for spring. Dad makes her a green smoothie and Onni and Olavi rub daffodils and rays of sunshine into her back. Then the whole family develop a passion for their balcony garden.

Onni takes action and realises he can have an impact on things that are important to him. Onni and his family are riding their scooters in a nearby park when they find out that there are plans afoot to clear their dear park for a road and tram tracks. That’s not acceptable in Onni’s opinion. The family makes cardboard signs and takes part in a protest, and luckily many others join them: “Trees, not roads!”, “Hedgehogs live here!” Eventually the decision- makers listen to the inhabitants in the area, and everyone is rewarded with a pastry when the park is saved.