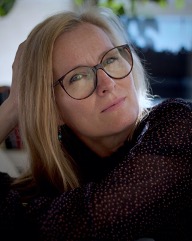 Katja Kallio is a critically acclaimed bestselling author and screenwriter. Since her striking debut on the Finnish literature scene in 2000, she has described the life and faith of misfit women at odds with the community,  in modern and past times, with her distinctive voice and thoroughly visual style. Her new, much anticipated novel This Transparent Heart, available in Finnish in August 2021, tells the forbidden love story of a young Finnish woman and a Soviet POW during WW2. Her previous novel, Amanda of the Night, inspired by true events in a mental institution island for women, was received with unanimous praise. Her books have sold more than 180,000 copies.

Kallio is praised for her accurate portrayals of the human mind. In her six novels she revisits themes such as the constant push-and-pull between distance and intimacy in a person’s life and the meaning of passion as a barrier-breaking force.

She has written box office movie adaptations of her own novels, and been a candidate for national literary and motion picture awards, including the prestigious Jussi Award for the Best Screenplay. An ardent cinema lover, she has written about movies in the iconic Image magazine for more than fifteen years.

Before writing she worked as a publishing editor, and translated fiction from Italian, Spanish and English. She hosts her own live literary salon, speaks fluent Italian with a Roman accent, and dedicates her free time to classical ballet.

INHERITED LAND by Maria Turtschaninoff sold in a pre-empt to Germany!

WHAT IS A ROBOT and MINI SCIENCE 3 sold to Turkey!