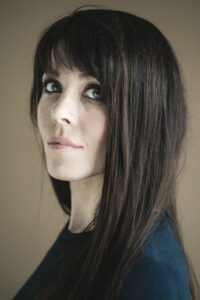 Riikka Pulkkinen (b. 1980) is one of the top names in Finnish literature. Her debut novel The Limit (2006) gained wide attention, was a bestseller, and was adapted into a play and a TV series in Finland. Her international breakthrough came with her second novel, True (2010), which was the one novel everyone was talking about that year at the Frankfurt book fair. The novel has been published in 17 countries to date.

Pulkkinen’s novels are characterized by the precision with which she describes the psychology of the characters, and the philosophical themes that reflect from the characters into the refined structure of the novels and culminate on the level of the plot. The main questions she explores in her novels concern power, responsibility, and justice.

Pulkkinen has an M.A. in Literary Studies from the University of Helsinki, and she lives in Helsinki with her husband and her two children. She enjoys dancing and running in the forest or by the seaside. If she weren’t a writer, she would be a psychologist or a baker.

For her works, Riikka Pulkkinen has received the Kaarle award in 2007, the Laila Hirvisaari Fund stipend in 2007, the Veijo Meri Award in 2019, and her novel True was nominated for the Finlandia Prize in 2010.